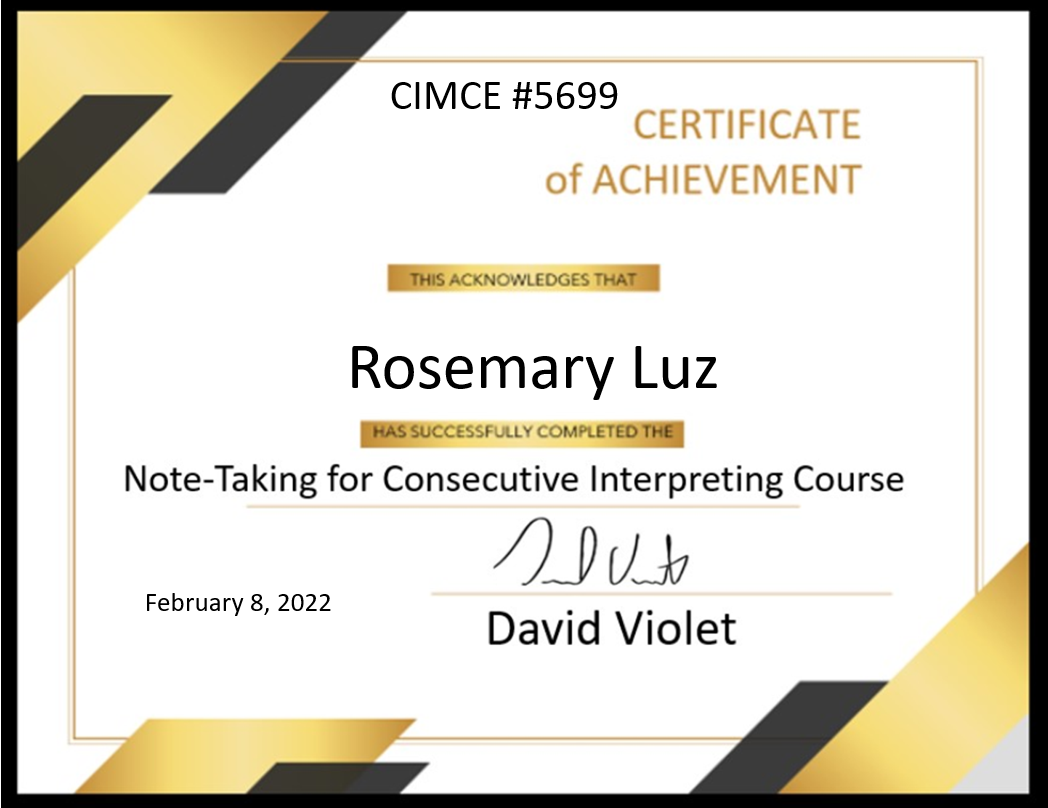 At last! In January I was finallly able to do a course, not a day or an hour-long webinar, but a course on note-taking for consecutive interpreting. I learnt about it when I registered for Terp Summit 2022 and attended an online free webinar on note-taking for consecutive interpreting given by David Violet, President of l’Association internationale des interpretes de conference (AIIC, the International Association of Conference Interpreters) in the USA. David trained at the presitigious Ecole Superieure d’Interpretes et de Traducteurs (ESIT), Paris.

I really enjoyed the class and found myself navigating to his website. There were two free classes on symbols and the concept of understanding with quizzes at the end to check that you had understood them. There was also a twenty-module course which I could do at my own pace and so I enrolled. I completed it in a month. I liked the way that David took things one step at a time and covered the basics very comprehensively before moving on to the next “baby step”. The course was and remains beautifully targeted. What became apparent was that I had to practice my new note-taking skills to embed them properly in my brain.

I began practice sessions with David in February and they have been extremely helpful in embedding the note-taking, as well as helping my simultaneous interpreting skills. I focus on the substance of what someone is saying like never before. In the practice sessions we listen to a speech in English and then interpret it into English. I think that this works very well for interpreters with English as a B or even a C language but I would like to listen to a speech in Spanish and interpret it into English or listen to a speech in English and interpret it into Spanish. I had a go at doing the latter last Saturday. I was in a break-out room with another Spanish interpreter, Fabiola Tortajada. I raced through the speech because I was expecting the timer to appear on the screen very soon. It was nerve-wracking and I forgot the Spanish word for ‘permafrost’. However, I got through it all and my colleague’s feedback was quite complimentary. Thank you to David, Fabiola and all the interpreters in the Saturday group.

Last month I experienced my first trial under Covid-19 restrictions. I was in the fortunate…

Being Part of the Solution

Last week I genuinely felt that I was part of the solution. Colombian senators visited…

Copyright © 2017 - 2022 Gomez Professional Services. All rights reserved.
Back To Top
Skip to toolbar